In their project for the Frankfurter Kunstverein/Hessischer Rundfunk, Dani Gal and Achim Lengerer performed with DJ consoles in front of the audience to create a new “text” from documentary, political material of public speeches, political statements and other original soundtracks of the 20th century. The sonic performance was staged as a live broadcast with audience at the Hörspielstudio 7 and aired on hr2- on the 27th of November 2011.

As a sound and spacial installation, the project was part of the exhibition Demonstrations. Making Normative Orders at the Frankfurter Kunstverein (curated by Britta Peters) beginning of 2012, 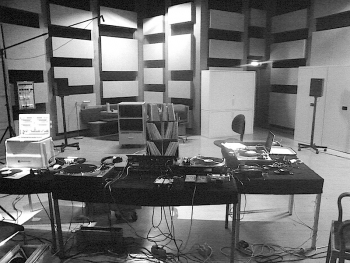