The two-part exhibition project at Scriptings (4 – 30 Sept 2014) and at Galerie im Turm (28 Nov 2014 – 09 Jan 2015) combines different modes of interaction with and intervention into three historical documents:
a short scene from the first meeting of the Round Table of the GDR in East Berlin, December 1989, a film sequence from the end of a strike in Paris, May 1968, a clip made while circling Tahrir Square in Cairo, February 2012. The two parts of the exhibition foreground different formats and aspects of reworking the material.

At Scriptings, the performance “She turns her head, she lifts the pen” (03 Sept 2014, opening 7 pm / performance 8 pm) abstracts a series of terms and gestures from the documents: repeating, interrupting, stopping, slowing down, speeding up, circling/revolving are concepts and, at the same time, physical movements that manifest a particular relationship between body and revolution. In the performance they also become a choreographic script for a set of on-screen and performative interventions into the material. A text/poster (Scriptings #42) functions as an additional commentary on the material around these gestures/concepts. The Poster is laid out and placed in such a way that it itself invites a small choreography of bending down, reading, circling.

A conversation with Elske Rosenfeld, Mareike Bernien und Sandra Schäfer on issues of the montage and rescreening of historical film and video footage and its legibility in historical narratives.

The video installation “Ein bisschen eine komplexe Situation/A mass is gathering outside”, a re-montage of the material from the Round Table of the GDR, will be at the center of the exhibition at Galerie im Turm, opening 27 November 2014. 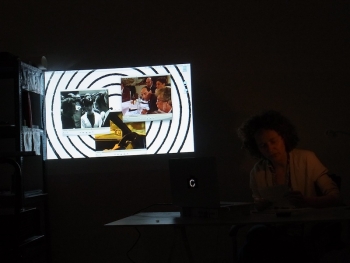 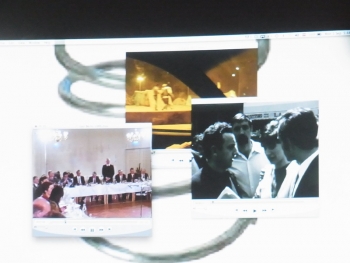 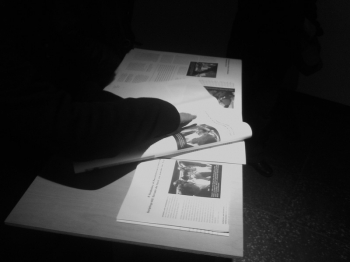