Achim Lengerer’s ongoing film research concerns a blank spot in the public mainstream discourse in Germany: namely, the important role played by politically active migrants on the left in the labour struggles in West Germany during the 1970s and 1980s. At a time when German industries first fell into decline and trade unions went into retreat, migrant workers from Turkey and Southern Europe were heavily involved in political actions on the radical left, for example in the so-called “wild strikes” of 1973 (especially at the Ford strike in Cologne). These activists made an indelible mark on the political landscape, in the leftwing and conservative press. Moreover, there are filmic documents, such as the short documentary This Strike Was Not Planned by Thomas Giefer, Yüksel Uğurlu und Karl Baumgarten, 1982. Currently, Lengerer is working towards the finalization of a series of short films in collaboration with local activists, which is co-produced by the Temporary Gallery and the Academy of the Arts of the Word, Cologne.

Images: private archives, Berlin/Cologne (no public use).
Listening session - with special guest Mitat Özdemir - Academy of the Arts of the World, Cologne, 2017

With warmest thanks to Peter Bach and Joachim Römer 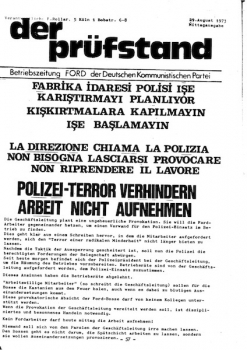 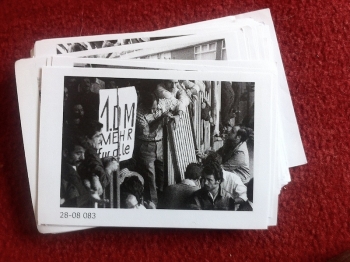