The exhibition will be on view until 31 January 2016
Visits by appointment
Event: 30 January 2016
Participants and further details to be announced.

We are pleased announce the exhibition “Dinge und Dialoge” at “Scriptings”, Achim Lengerer’s showroom and publishing house. It is a project that has evolved over a long time frame, the concept of the exhibition emerging in continouus exchange between us and our individual artistic practices.

The exhibition explores the relationship between the material character of things and the physical existence of the observer. We read the language of objects and ask questions about the particular, unique standpoint from which we can speak and perceive. Where everyday objects and art objects concur, due to their similarities and differences, their status becomes productive.

Our questions are addressed to the objects as well as the observer:
The possibility of seeing differences in objects, or to recognise an object as something distinct, is dependent on the capacity of seeing and comprehending. What is the difference between the everyday objects that surround us, ubiquitous technological objects and the art objects that we want to talk about here?
Are we actually touched in a specific way by objects that others direct at us? Is it a gesture sent in our direction, which upon decrypting itself possibly reveals and formulates an idea, one which is both carried by it and the source of it?

The exhibition accompanies a two-part publication realised in collaboration with the Viennese design agency Studio Vie and an event in January 2016.

SAPROPHYT is a nomadic platform for exhibitions, discussions and an open dialogue between artists, curators, writers and theorists. 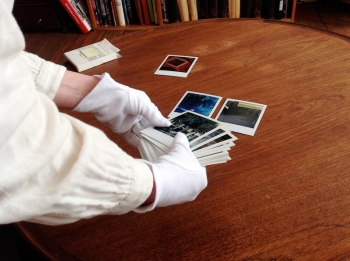