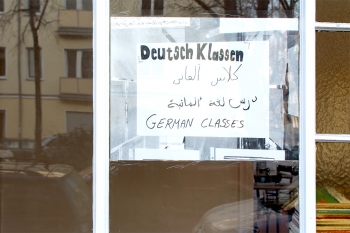 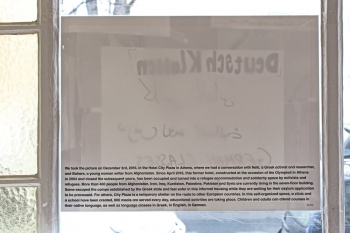 On the Verso of the print one can read:
"We took the picture on December 3rd, 2016, in the Hotel City Plaza in Athens, where we had a conversation with Nelli, a Greek activist and researcher, and Bahare, a young woman writer from Afghanistan. Since April 2016, this former hotel, constructed on the occasion of the Olympiad in Athens in 2004 and closed the subsequent years, has been occupied and turned into a refugee accommodation and solidarity space by activists and refugees. More than 400 people from Afghanistan, Iran, Iraq, Kurdistan, Palestine, Pakistan and Syria are currently living in the seven-floor building. Some escaped the camps established by the Greek state and feel safer in this informal housing while they are waiting for their asylum application to be processed. For others, City Plaza is a temporary shelter on the route to other European countries. In this self-organized space, a clinic and a school have been created, 800 meals are served every day, educational activities are taking place Children and adults can attend courses in their native language, as well as language classes in Greek, in English, in German."

Maria Iorio and Raphaël Cuomo are an artist duo based in Geneva and Berlin. In the recent years, their collaborative artistic practice involving long-term research has investigated the economies of visibility in relation to past and present mobility regimes over the southern and northern shores of the Mediterranean Sea. Their last projects examine the intertwined histories of migration and cinema and manifest a counter-memory of the “economic miracle”. The resulting body of work brings together films, performative moments, collected documents, architectural displays.